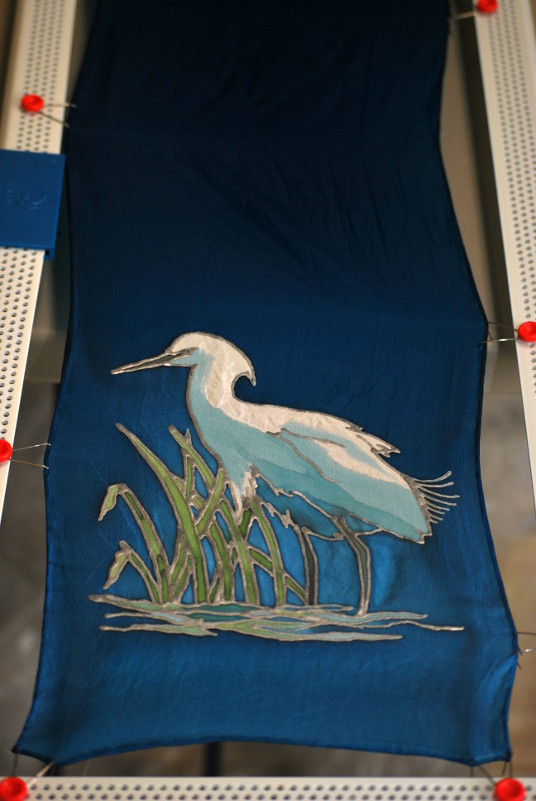 Each December, it seems, I pick up a new technique, and spend my winter break learning it.  It helps to have an extended period of time to just focus on the new skills needed for that technique.

This year, I'm working on silk painting, and the way I go about it is experiment, experiment, experiment.  Watch videos, read blogs, try things that may be disastrous, try something you think won't work and learn why it doesn't work.  Make happy accidents.  I've been at it about a month now and, after a few dozen scarves, am getting pretty comfortable with the technique.  I hope, though, to keep at it and get some pretty interesting pieces done!

Egret on a Rope

Here is a brand new tile painting - oil on cream-colored marble.  It is 4x4", and has a gold border.
Posted by LM at 8:38 AM No comments:

So I found a Guerrilla Painter 9x12 pochade box on clearance, which meant I had to take it for a test drive this weekend!  I went to Locke, CA, with the Sacramento Plein Air Painters meetup group.  Locke is a turn of the century old-west town south of Sacramento, now owned by the CA State Parks department. 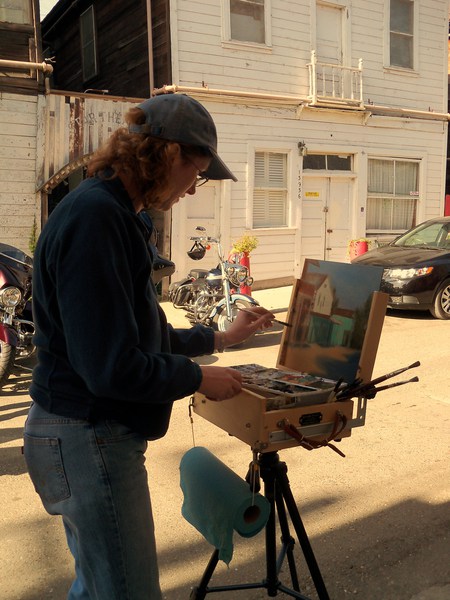 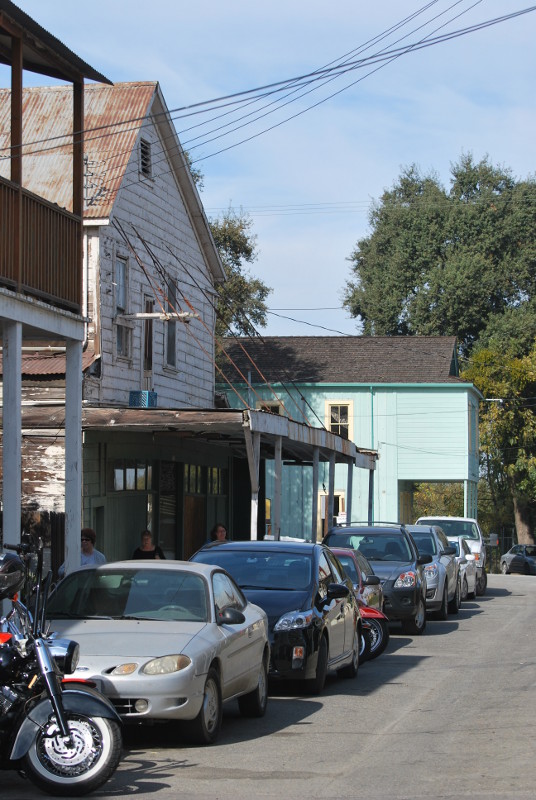 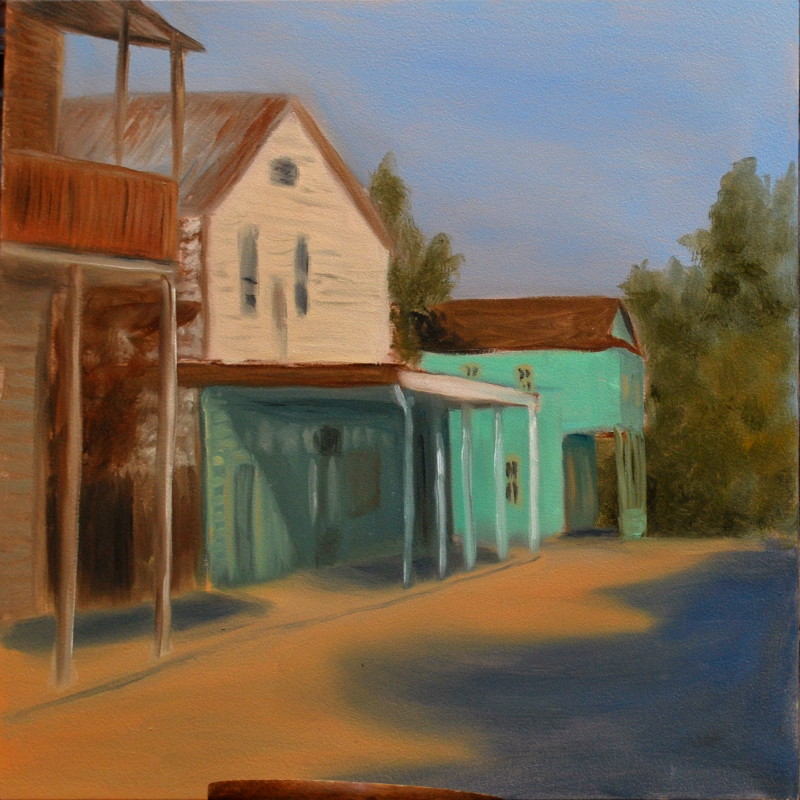 This is 3 hours of work on location - I might work on this painting some more the next time I go to Locke, as I can't use my usual technique of layering during a single session of plein air.  This is painted on a 12x12" sheet of gessoed Dibond aluminum. 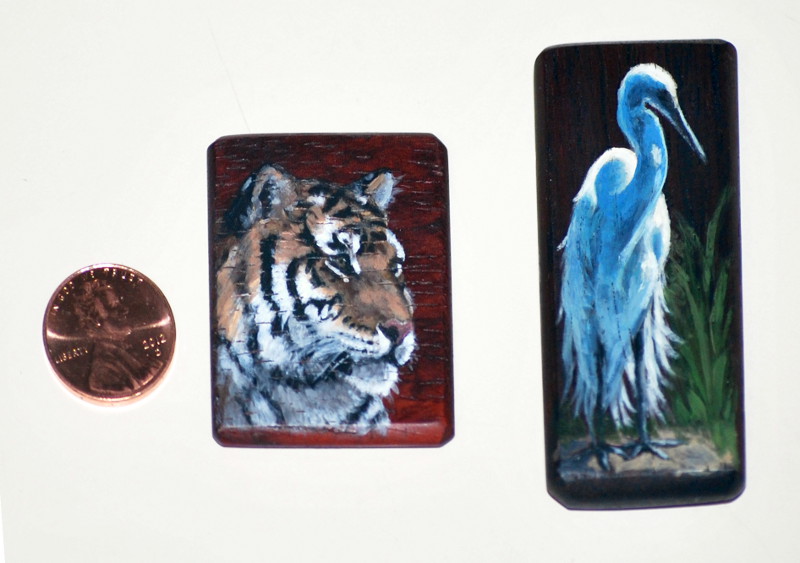 Here are 2 more miniature paintings finished, these will be varnished and wire-wrapped as pendants. 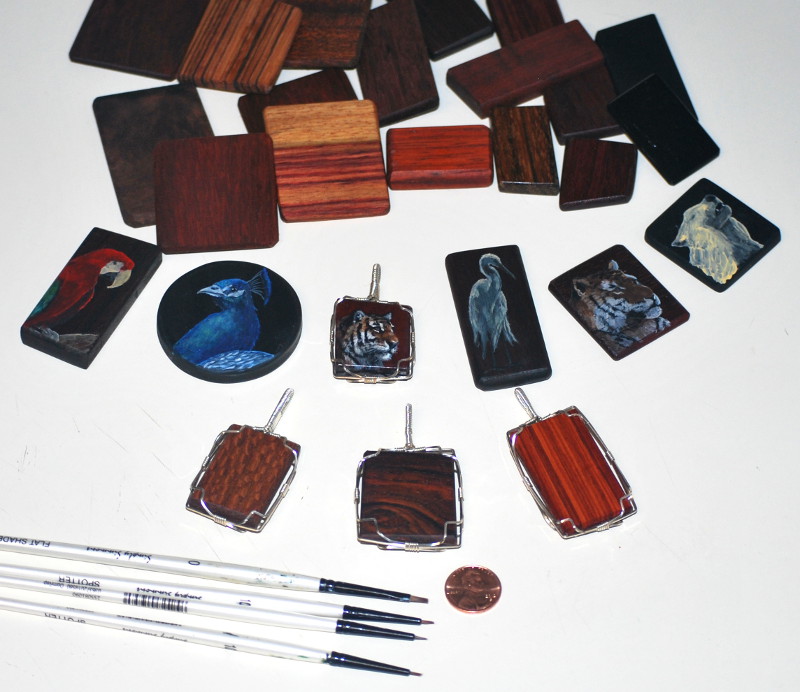 More pendants are coming!  The unwrapped paintings are still in the underlayer stage, and still need 1-2 more painting sessions to finish.  The pendant blanks have all been sanded and are almost ready for painting.

Most of these are 1-2 inches in size.  I'm using Golden Open Acrylics for this project and the wire wrap is silver-filled.  My usual brushes and a penny for size comparison.  :)


Here are more tile paintings, all of these are 4x4 inches and have a gold edging.
Posted by LM at 1:30 PM No comments: 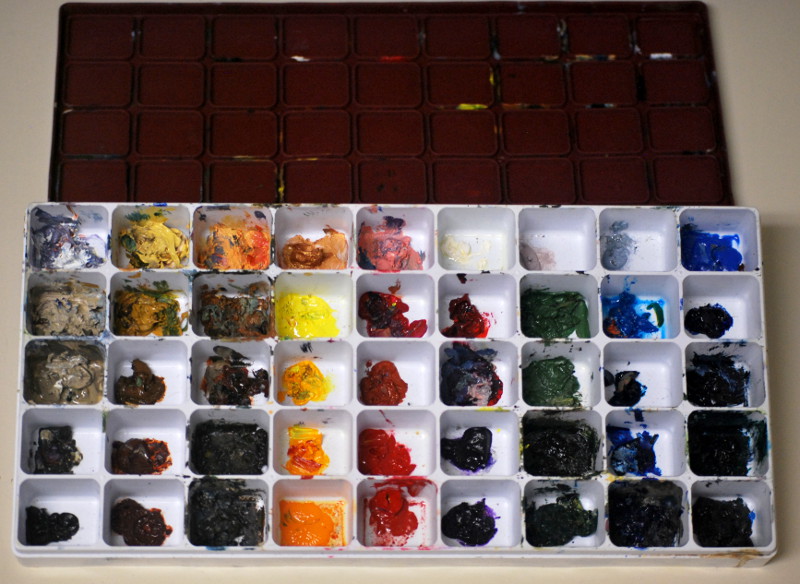 So, I just wanted to show off the palette/paint keeper I've been using - "Master's Touch 45 well sealable palette with lid" - it's like Tupperware for paints. I have my most common colors in it and when I'm done I put it in the freezer. Some of the colors (not all, of course) are still fresh maybe 8 months later. Other colors I have to refresh more frequently, but it's nice having all available colors visible.

If you haven't already, please go ahead and visit my Facebook page and click "like" to get updates.  I will also be running some auctions on some of my paintings and I will be posting these on Facebook as they become available.  As of right now, I have the 4 tiles listed below available, and I will be posting new items frequently.  Also, please check out my Etsy site, listed on the right-hand bar, for more available paintings

I've finished up a few more of the granite and marble tile paintings, these are all 4x4 inches, painted in oil.  They have been edged in gold, and can be displayed on a tile easel or framed.


Here's another large one I'm working on - this is the 3rd layer but still have much more work to do on this one.
Posted by LM at 9:01 AM No comments:


Here is the final for the large egret painting, I expect to have this in the High Hand Gallery Artstock show in September. This painting is 2 ft x 3 ft.  I have a few more large paintings in the works, too!
Posted by LM at 1:22 PM No comments:


If this looks familiar, you're right!  A lot of times I'll do a miniature painting as a thumbnail to work out the kinks for a larger painting.  This isn't done yet, but made a lot of progress today - added the entire background.

Working on this for an upcoming large format show in September.


Here is another tile painting finished - this is 4x4 inches on a white marble tile with grey veining.  The polished back side of the tile is left visible, and the edges have a gold border.
Posted by LM at 8:46 AM No comments:

Here are a few more tile paintings - these are mainly study and practice for me, doing some still life and animal studies, but I'm really enjoying how they are turning out as well.  I'm finding it really enjoyable to explore different types of surfaces to paint on, as each imparts its own unique texture to the painting.  These three are varnished and ready to go! 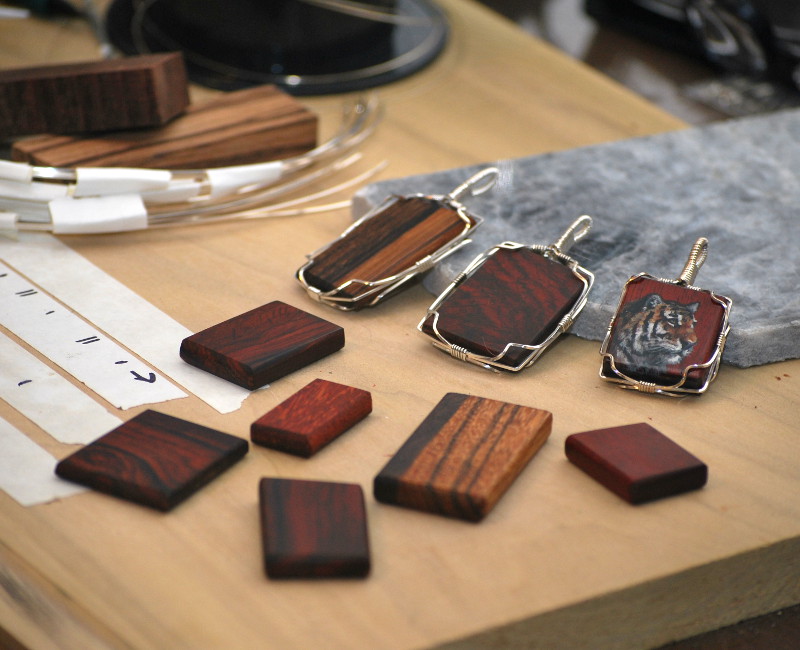 Thanks to everyone for the great response to the handpainted pendants!  It's been quite an adventure putting 3 distinct techniques - woodworking, fine wirewrapping, and miniature painting - together to make these.

Because some of the reclaimed hardwood pieces I have are so intriguing by themselves, I am also starting to make some unpainted pendants that will show off the beauty of these wood pieces.

Each has been finely sanded and is bordered by a silver-filled wirewrap. If you are interested in purchasing a pendant, please feel free to contact me directly.


I am starting a new series of miniature paintings on granite, marble, and other stone, and here are the first couple that are almost finished!  I've also included the reverse side - I've kept the polished tile as is, and edged it in gold.  Every tile is different, so the back will not be the same as what is shown here.  Each painting has its own unique texture, created by the grinding marks when the tile was originally made, as well as the texture of the stone itself.

I hope to have these available at High Hand Gallery soon, but as always, if you see something you like on this blog, feel free to inquire, as it may still be available.  :)

I've finally settled on a design for the pendants I've been working on, and here are a couple of the first examples - these are handpainted fine art miniatures on exotic hardwood fragments, with a silver-filled wire wrap.  Now to make more of these!

Jewelry design copyright L. Merchant
Posted by LM at 8:57 AM No comments:

A time comes, periodically, for an artist to put down the usual work and go in a completely different direction. It doesn't mean that the old work is finished, necessarily, but that for the work to improve new skills need to be learned.

I seem to do this over New Year's every year, and this year it happened again. I had an idea for a project, but lacked the skills to pull it off. I wanted to paint miniatures and make them into jewelry pieces. Painting small isn't really a problem for me, but what about making the actual jewelry fittings? What about the substrate, how could I make the piece unique and special? With a little help from my gallery friends (Thank you, you know who you are!) I learned a bit of metalworking, and a bit of woodworking.

These aren't done yet, and I haven't posted in a while because I wanted to improve on the idea first - but at least you can see where I'm going with this. Hopefully soon I'll have some awesome pieces to show. :)

A video about John Howe and his technique, an illustrator for Lord of the Rings.

I went to see the Norman Rockwell exhibit at the Crocker Art Museum and...wow.  The guy could paint.  Here's a list of observations about his paintings and technique (note, these are my own personal observations from memory and have not been fact-checked.)

The paintings are much larger and way more textural than I had thought.

On some, he appears to have used a thick gesso prior to starting the painting.

He used a variety of canvas weaves - some were miniscule, others were nearly as heavy as burlap.

He really varied the amount of detail used in each painting.  Some areas of lesser importance were left nearly as underpainting washes, while other areas such as faces were much more finely rendered and also had more paint.

He used paint thickness to advantage.  On white highlights, he built up the paint. The miner's light in "Mine America's Coal" is especially thick.  Also, in The Art Critic, the paint on the palette is built up as it would be on a real palette.

He uses a wide variety of colors to draw the eye.  In Girl at Mirror, her dress is made up of light blues, yellows, and pinks.  There is a tiny dot of cadmium red (?) at the join between her shoulder and the dress, apparently solely to draw the eye.  This is again seen in a couple other areas of the painting too.

There was a certain blue-green color that he used in paintings over and over again.

Often the charcoal lines were very visible and added to the final impact of the painting.

In one painting, a newspaper's lettering was rendered so small and so finely that I wonder if it was done in ink rather than paint?